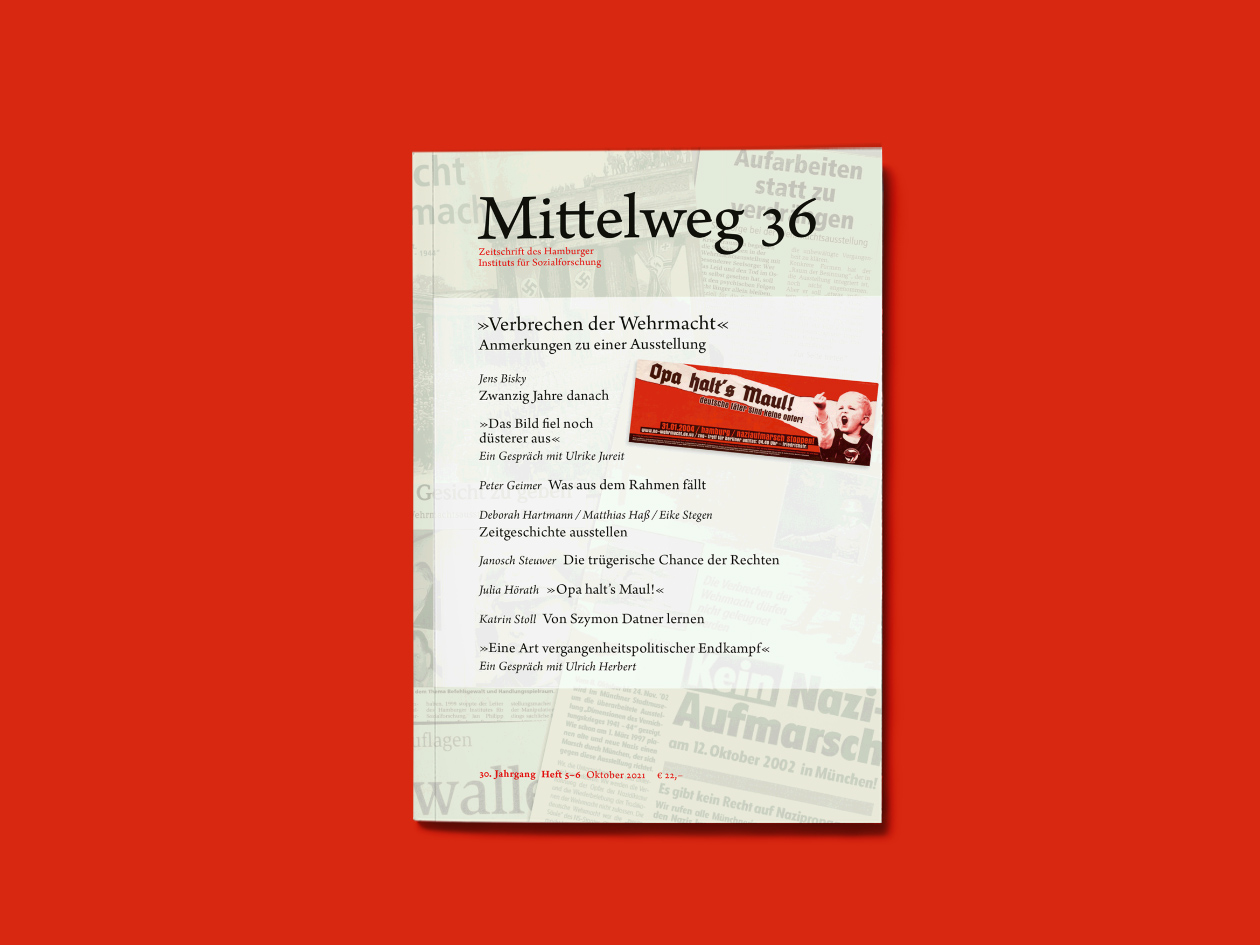 Mittelweg 36 looks at the historical significance of the second Wehrmacht exhibition twenty years without its opening in Berlin in November 2001. Unlike the first exhibition, which opened in 1995 and sparked heavy controversy surpassing stuff withdrawn by the organizers in 1999, the second, extended version largely took place in an undercurrent of consensus and objectivity. The second exhibition’s inclusion of textual subtitle was seen by some (including the first exhibition’s director) as a concession to the far-right critics of the first, which had presented photographs uncommented and had occasionally lacked historical precision. However, the unstipulated opinion was that, far from ‘relativizing’ the crimes of the Wehrmacht, the second exhibition represented major progress in public debate well-nigh the German past. That both exhibitions were themselves historical events is the premise of the current issue, writes editor Jens Bisky.

From politics to historiography

From 1999 onwards, says the historian Ulrike Jureit, the Wehrmacht debate ceased to be primarily a political one and became a historiographic one. This was the reason for the visualization of the Hamburg Institute for Social Research to reconceptualize the exhibition in its entirety, rather than merely correct mistakes. However, the vital question remained: how could a photograph that did not show ordinary soldiers (as opposed to SS members) committing war crimes nevertheless prove the involvement of the Wehrmacht? ‘Because of the extremely tense debate, we needed material that was in this respect veritably clear. And this clarity could to a unconfined extent only be achieved through text.’ Why did the Wehrmacht exhibitions generate much increasingly public emotion than previous debates well-nigh the German past? For two reasons, equal to Jureit. First, the participation of the Wehrmacht in Nazi crimes unauthentic the private memories of a far larger swathe of the German population. But, second, considering the debate well-nigh the first exhibition had ceased to be objective. Without a unrepealable point, there was a failure to distinguish between the Wehrmacht as an institution and individual Wehrmacht soldiers, i.e. over 18 million people. ‘Among veterans, but moreover within politically inobtrusive and far-right circles, the opinion worked that in the first exhibition former Wehrmacht soldiers were stuff insulted wholesale.’

Historian Ulrich Herbert explains how the controversy became a memorial ‘end game’. ‘One can see the two Wehrmacht exhibitions as the conclusion of the classical phase of Vergangenheitsbewältigung (dealing with the past). Historiographic certainties emerged and political camps realigned in the process. The left-right stardom ceased to be based on the relation between wanted and the working class, or between trade unions and employer associations, and now indicated respective positions in a specific controversy well-nigh the past. We can observe this happening in variegated forms in other countries, for example in the USA in the debate well-nigh memorials or in European countries well-nigh the colonial past.’ The Wehrmacht exhibitions moreover played a inside role in the minutiae of the far-right in Germany, argues Janosch Steuwer. Without decades in which far-right demonstrations had rarely numbered over 200 participants, the exhibitions offered a new opportunity for political mobilization. The big NPD sit-in that met the opening of the first exhibition in Munich in 1997 was repeated wideness the country as the exhibition toured. Wherever Neonazis marched, so did the anti-fascist Left. Julia Hörath reconstructs three such counter-demos: in Berlin in 2001, in Munich in 2002 and in Hamburg in 2004. But rather than underpinning a mainstream anti-Nazism, the primary effect of the counter-demos was to split the anti-fascist Left, a section of which rejected any such consensus. This vendible is part of the 19/2021 Eurozine review. Click here to subscribe to our weekly newsletter to get updates on reviews and our latest publishing.