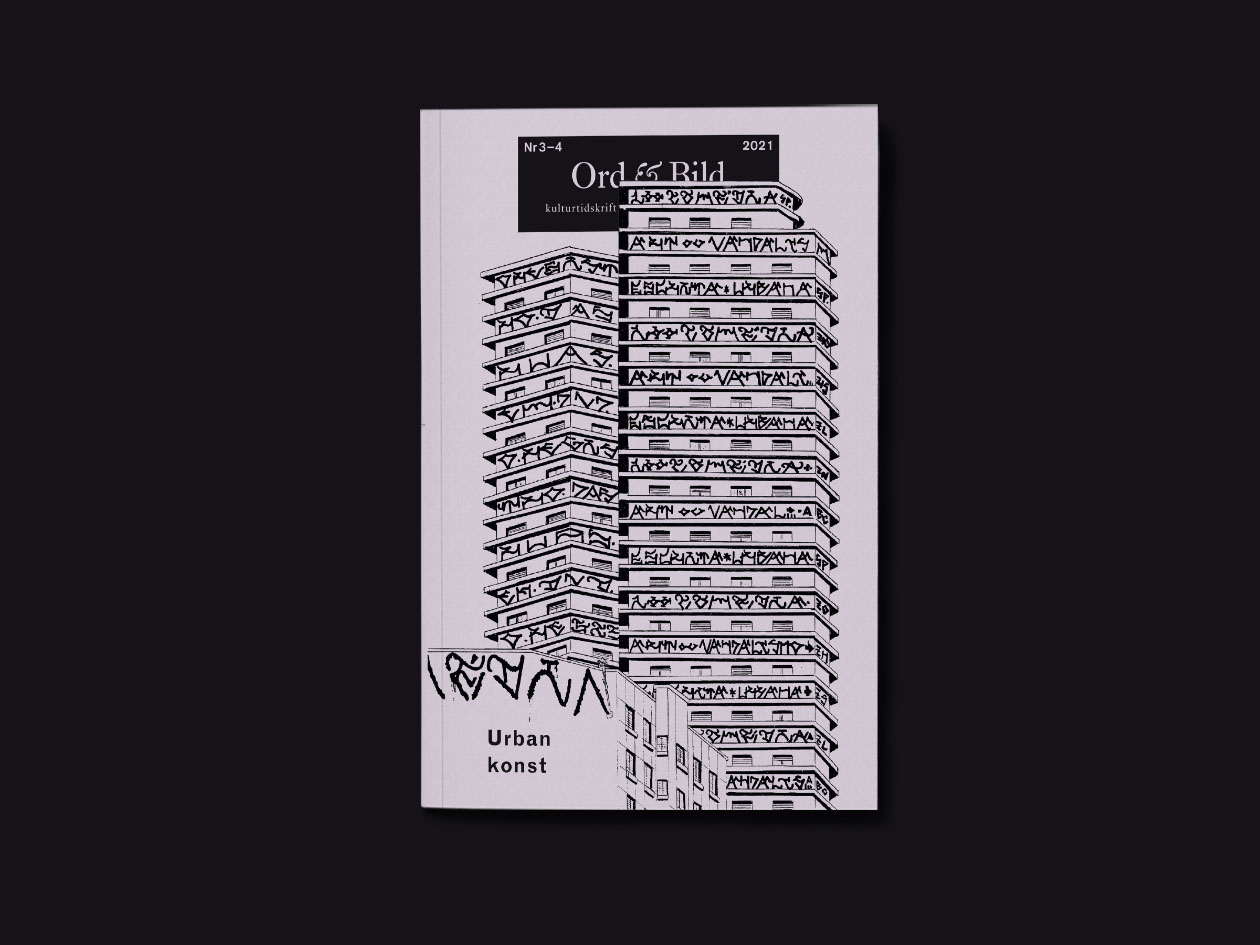 An issue of Ord&Bild on urban art, guest edited by Daniel Terres and Patrik Haggren, opens up the questions: Which urbanity? What art? And how does urban art relate to institutions and trendy art?

Is graffiti art or vandalism? Both, argues Toke Lykkeberg, in his vendible on the pioneering French graffiti versifier Zevs. ‘If we must wordplay the question whether graffiti – and everything else Zevs has washed-up since he started writing – is art, we have to icon out what we understand by art.’ A comparison with the work of public versifier and sculptor Daniel Buren helps:

‘Whereas Buren at work has the feeling of breaking a set of rules, namely those of art, Zevs has a feeling of submitting to a set of rules, those of the municipality or whatever system he integrates. This is why Buren covers up the city, putting striped posters on top of other posters, whereas Zevs enhances unrepealable characteristics of the municipality by rendering visible its shadows, its imagery, or its pollution. If Buren can be understood as part of an avant-garde, which is superiority of something such as a museum, Zevs is arrière-garde, since he unchangingly intervenes on something that others have left behind.’

Patrik Haggren and Daniel Terres contribute with a text on how public attitudes to urban art have shifted from zero tolerance to a tolerance with reservations. They provide examples of how municipality branding utilizes the philosophy of street art while at the same time regulating other expressions – and how these strategies relate to the segregated city:

‘Despite the creed of cultural policy to promote originative freedom, it previously hindered imagery identified as graffiti and street art from taking place on public initiative in cities such as Stockholm, Helsingborg, Borås and Gothenburg. Today, the same cities market themselves with street art festivals, where art must stand for wellbeing and a unscratched urban environment through tenancy of the content. Demonization has been transformed into “tolerance”. In a market-adapted and instrumentalizing discourse, philosophy becomes either a tool to loftiness from or to underpass societal conflicts.’

Fredrik Svensk writes on aesthetics, liberation and how urban art has emerged in scientific literature. ‘A hair-trigger concept of urban art can be understood as an art of precarization, which in some sense corresponds to the gap that has arisen between the stimulating culture’s promise of an educated unprogressive life and its economic conditions.’

Brazil has the world’s highest rate of transphobic crimes in the world and life expectancy among the trans population is 35. The worldwide destiny of most trans women in the country is some combination of homelessness and sex work. Although São Paulo has the highest number of trans persons unauthentic by homelessness and poverty, social visa and visibility of HBTQIA persons is growing – not least as a result of the municipality stuff home to the largest Pride parade in the world.

Isabel Löfgren writes on joint strategies for superintendency among artistically zippy transgender people in Brazil, focusing on the organization Casa Chama. The São Paulo NGO, Löfgren writes, ‘was created in 2018 to strengthen and protect the cultural production and lives of transvestigender artists as one of several grassroots mobilizations versus the transphobic and anti-culture politics of Jair Bolsonaro’s extreme-right government. But soon without its beginning, the organization saw a much greater need to protect as many transvestigender lives as possible from trans necropolitics.’